Interview with a Host Family from Austria/ Slovenia 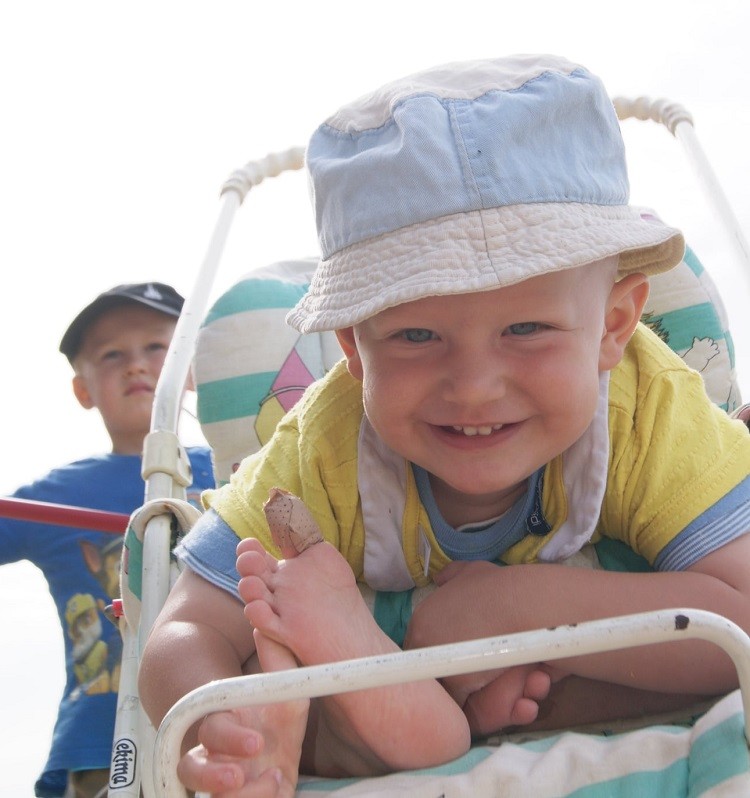 Family Paulin from Austria/Slovenia already hosted several Au Pairs from different countries. Today, the mother of the family talks about her experiences and gives an insight into the procedure of having an Au Pair at home.

AuPair.com: Thank you very much for taking the time for our interview! To start with, we would like to ask you a few questions about your family so that our readers have a better idea of your situation. How many children do you have and how old are they?

Mrs. Paulin: At the moment there are two little boys, the older one is just under four and a half, the younger one will soon be two.

AuPair.com: And why did you decide to take in an Au Pair?

Mrs. Paulin: I have been working with nannies since the beginning, I had already recruited two nannies for the older one since he was born. The thing is that the turnover rate for the job is quite high. So I thought, why don't I host an Au Pair? I had also worked with Erasmus students who wanted to live for free in exchange for babysitting. Shortly before my second son was born, I thought, maybe I'll recruit an Au Pair now, because they are always relatively willing to travel. At the time, we commuted between Austria and Slovenia and I couldn't have done that with Erasmus students. They have their university courses locally, so I thought, well, I'll start with an Au Pair now, and it worked out great.

AuPair.com: Did you have any special requirements for the Au Pair? For example, did you only look for Au Pair girls or did you also consider Au Pair boys?

Mrs. Paulin: Already among the Erasmus students there was one man, that was a Greek, I also had some male babysitters. Of course, it is a field dominated by women, no question, but there are enough men who do it as well. Among the Au Pairs, the first one came to us as a girl and left us as a boy, all that was not an issue at all from my side. The only thing that is important to me is that they all speak to my children in their mother tongue, so that the children learn another language. That was the only requirement, and then of course the classic things, liking children, being practical, being patient, things like that. But that was it in general.

AuPair.com: Is it important to you that your child grows up multilingual?

Mrs Paulin: Absolutely! I am a diplomat by profession, so I know how important languages are in business. Depending on where you are, one language is spoken more often and then not for a few months. My eldest speaks Japanese, Greek, Hungarian, Albanian, Persian, among others, of course at different levels. The little one is still too young to see the effects. He does use expressions in other languages from time to time, he parrots them nicely, but of course I couldn't say now that he already speaks another language.

AuPair.com: How many Au Pairs have you had so far?

Mrs. Paulin: Well, "real" Au Pairs two, with the Erasmus students it was three or four, depending on how you count. Until then it was just Erasmus students who came to the city, wanting to live cheaply.

AuPair.com: And from which countries did these people come?

Mrs Paulin: The first one was a Greek, then we had a Slovakian, then a German and from the classic Au Pairs it was a French and an American.

AuPair.com: Was it easy to apply for a visa for the American?

Mrs. Paulin: Yes, very much, in Austria it was no problem at all. There are special Au Pair visas, Au Pair contracts, and it went really quickly. I think I already had the work permit a week later, we just had to register her and get an authorization card, so about two weeks in total.

AuPair.com: How do you prepare yourself when a new Au Pair arrives? Do you have a certain routine?

Mrs. Paulin: Absolutely, I usually explain to them by e-mail how our daily routine works. The Au Pair has 18 hours per week, I leave it up to them how they want to accumulate the hours per week, they don't have to be available all the time. The only thing I do is to be there a little bit at the beginning, explain how feeding works and then change the nappy, that's the only thing I have to be there for now and then, the rest is automatic. I explain to the Au Pairs until when they can stay outside with the children, until when the little one sleeps.

AuPair.com: It sounds like you already have a lot of experience as a Host Family. How long does your search take on average?

Mrs. Paulin: The first one I started looking for in mid-December and she started in January. So it was only a few weeks. She really wanted to go to Slovenia and I was more or less the only Host Family there. With the other one, I think I started in May or June, and she was there at the end of June. However, with the first Au Pair, we weren't even in contact by phone, only by e-mail and then everything was done. The other Au Pair came here for two days, looked at our home, looked at the room, and then decided on that basis whether she would stay and came back later. Now, on the other hand, I'm trying to recruit for Vienna, and it's very difficult because of the Corona circumstances. I've already had a few interviews, but basically one option after the other falls through because the Au Pairs can't travel or don't know if they can travel. So the search definitely takes longer here, even if you would like to think that there would be much more choice and it would be less complicated, but obviously it is not.

Mrs. Paulin: Yes, they are used to constantly changing babysitters. But it can be very risky if the children don't accept the person, then you have a problem. If you recruit a babysitter locally, they can just come over and if it doesn't fit somehow, they leave and everything is fine. With the American woman who comes by plane, it's hard to just cancel it. But with us it went without a hitch in all cases, so that was a stroke of luck.

AuPair.com: Do I also hear that you got along well with the Au Pairs personally?

AuPair.com: That sounds really great! Did the Au Pairs come to Austria with the aim of learning German or did they rather want to learn Slovenian?

Mrs. Paulin: Most of them came with the intention of wanting to be in Slovenia in the first place. The American girl had already been able to speak German before, but rather moderately, and for her it was already an extreme progress with us. The other one, for example, also practised Spanish here.

AuPair.com: You have hosted Au Pairs and Erasmus students from so many different countries. Were there ever any culture shocks? What kind of experience do you have with this?

Mrs. Paulin: For me it is not so much a problem. It is my job, I am constantly confronted with other cultures and culture shocks are normal for me. The children also see it as normal, they don't know anything else. But I rent out three rooms here, so there is sometimes friction. The closer the cultures, the easier it is. When the American girl started, I had a Dutch and a German girl living here, and it went relatively smoothly because they were also similar cultures. Then a Japanese moved in, it went moderately well, probably only because the American had lived in South Korea for a long time and was a bit familiar with Asian cultures. But in short, it was not exhilarating.

AuPair.com: Was there perhaps a certain culture shock when it came to food? We often hear from Au Pairs who experience that the Host Family eats very differently from them. How did you experience this?

Mrs. Paulin: In our case, it was solved in that the Frenchman had a girlfriend locally and usually spent as much time as possible with her. He only ate with us a few times, and that went great. He wanted to cook for himself more often, and the American made it clear from the beginning that she definitely didn't want to eat with us because she has lactose and gluten intolerance. All of our Au Pairs had their own kitchen to themselves and the few times we ate together, I made sure that we cooked things that she ate or that she cooked herself and that worked well.

AuPair.com: If you were talking to a prospective Host Family who was planning this for the first time and had no experience, what advice would you give them?

Mrs. Paulin: With the first Au Pair, we didn't even meet by phone, so that was relatively risky. I would recommend making contact, for example by video phone, and getting a picture of the person. There are many who want to try an Au Pair year simply because they want to travel, and I don't think they are all suitable for childcare. You should at least look online at how the person presents themselves, how they dress, how they speak, that you look at the lifestyle before the Au Pair actually comes. You should maybe get to know each other before you start.

AuPair.com: Our final question: Would you host an Au Pair again?

Mrs. Paulin: Absolutely! It's a great form of childcare, also from a cultural point of view.

AuPair.com: Thank you very much for the interview!

Do you also want to experience the Au Pair program? Then wait no more and register now!

Subscribe to our newsletter:
Popular posts:
Interview with a Host Family from Austria » by Julia on 1st Mar, 2021
How I found an Au Pair during pandemic » by Nikki on 16th Dec, 2020
Au Pair from Ukraine tells her story » by Elmaz on 16th Dec, 2020
My year in Germany as an Au Pair from Peru » by Abigail on 21st Jul, 2020
When a Family finds a perfect match » by Stuart on 16th Dec, 2020
Join us
Are you looking forward to starting the Au Pair program? AuPair.com will help you find your future Au Pair / Host Family.
Register with us and get to know what we can do for you:
Register as an Au Pair
Register as a Family