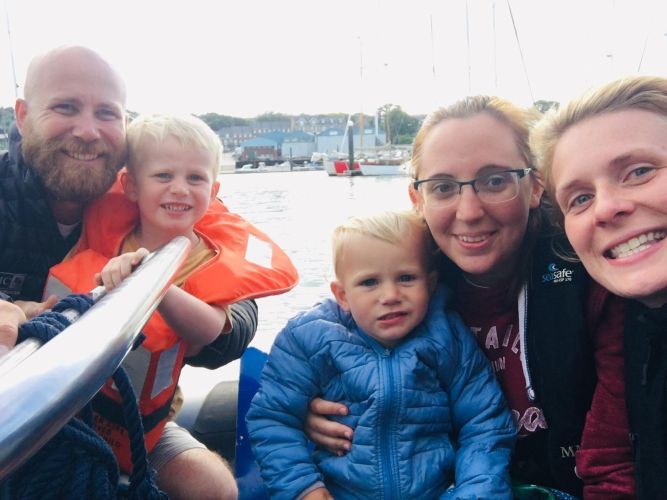 I spent my Au Pair stay in England, more precisely on the Isle of Wight down in the south of England. The island is bigger than you would expect and can be reached by three different ferries as well as by hovercraft and has one thing above all: beach. In the summer there is a lot going on on the island due to tourism, whereby mainly English people spend their holidays on the island and so only few other languages are spoken. In winter the island becomes quiet and contemplative and you should be prepared for rain. Thanks to the nearby Gulf Stream, however, it does not get cold in winter and the temperature stays above freezing.


My Host Family has been friendly and enterprising, we have been on the road a lot and have taken walks, bicycle and boat tours. I really enjoyed the time and learned a lot. Especially linguistically and in listening comprehension I have developed. I also learned a lot about the English culture. Since Brexit was a fast-paced topic during my stay - the islanders are in favour of England's withdrawal from the EU - politics was a big issue. Frighteningly, the news coverage on BBC is very one-sided and strongly influenced by politics.
During my time in England I have seen a lot, from Land's End to Stonehenge and various cities such as Bath, Bristol and York. I also visited Hadrian's Wall and Edinburgh and enjoyed everything. Scenically and especially historically, England has a lot to offer and is very rewarding. As many of the great attractions are maintained by English Heritage, it is very worthwhile to invest in an English Heritage membership card and save a lot of money (just by visiting Stonehenge you can get out almost half the annual price).
As further tips for other Au Pairs, I can add that English Bed & Breakfasts are usually very good, but you shouldn't expect too much from the so-called continental breakfast. The English Breakfast on the other hand is often prepared with a lot of love - but you have to get used to warm sausage, English beans and warm tomatoes for breakfast. Often there are very good (and also cheap) offers if you can plan two to three weeks in advance.
Best wishes,
Veronika

Subscribe to our newsletter:
Popular posts:
Interview with a Host Family from Austria » by Julia on 1st Mar, 2021
How I found an Au Pair during pandemic » by Nikki on 16th Dec, 2020
Au Pair from Ukraine tells her story » by Elmaz on 16th Dec, 2020
My year in Germany as an Au Pair from Peru » by Abigail on 21st Jul, 2020
When a Family finds a perfect match » by Stuart on 16th Dec, 2020
Join us
Are you looking forward to starting the Au Pair program? AuPair.com will help you find your future Au Pair / Host Family.
Register with us and get to know what we can do for you:
Register as an Au Pair
Register as a Family