How to celebrate Halloween as an Au Pair with your Host Kids?

Halloween is coming! Are you ready for the scariest night of the year? Your Host Kids will be thrilled, looking for the tricks to do to their Au Pairs and their friends. The Halloween’s pop culture Halloween has actually ancient origins and its celebration varies around the world.
Being the Au Pair program a cultural exchange, you will probably discover a new way of celebrating Halloween in your Host Country, therefore it could be useful to read the whole story of the Feast, in order to find out the common roots of the rite around the world.
We will summarize the long history of Halloween for you, so that you will be ready to tell your Host Kids about it; we gathered a list of movies to see with the Host Family, together with ideas and tasty recipes that will make your Halloween memorable. Get ready, this is Halloween!

From Celts to Romans

Halloween dates back to thousands of years ago, when the Celts still inhabited Northern Europe. They used to hold  Samhain festival, a celebration of the end of summer, the harvest and the beginning of winter. The change of season was related to the relationship between the living and the death: during the night of the festival the ghosts of the dead were believed to return to earth, where they would find bonfires, sacrifices and food. Their presence was quite disturbing for the Celts, who used to wear animal heads and skins - the current Halloween costumes - to hide from the ghosts; they also left food outside their homes to keep the guests outside.

As the Romans arrived, multiple traditions melted together: the Romans used to commemorate their dead during the Feralia in October.
The feast of all martyrs and saints came with Christianity, around 600 AD, and was established in 1st November, while the 2nd became the All Souls’ Day, dedicated to the dead. The original name was All-Hallows (All Saints’ Day) and the night before became All-Hallows Eve. Sounds familiar? Even the Christians used to celebrate the sacred days with bonfires, parades and costumes. During the parades, poor people were given the so called soul cakes - just as the Celts used to do with the ghosts!

Halloween is nowadays the second largest holiday in the US. But how did the night before the Saints’ day became our Halloween?
The US personalised the celebration, putting together the different traditions of the country: from the harvest feast, to the sharing of stories about the dead, Halloween slowly became the trick-or-treat day. The dressing up and the begging for food or money dates back to the 19th century.

Halloween around the world

The Anglo-Saxon countries take the Halloween holiday really seriously, since the celebration is rooted in their history. With globalization, the trick-or-treat tradition has spread in most countries, where both adults and children enjoy a fun night with their costumes and their scary faces. But being a tradition connected to spirits and souls, the living and the dead, every culture around the world has a similar custom. Let’s go through a few of them!

In Guatemala, in the town of Santiago Sacatepéquez, the All Saints Day is celebrated with decorated kites that fly all over the town. The flight is in direct connection with the dead relatives in heaven, with peace and respect. It’s a Maya tradition!

Also known as the Festival of the Hungry Ghost, this Chinese tradition refers to the spirit of the dead which are back in the world to enjoy the food offered from their relatives during these days in September. This feast is also connected with the harvest, as the Celtic one. The ghosts that come back are ancestors of those who forgot to organize a proper ritual for them: they come back to say goodbye!

El dia de los muertos is one of the most famous Halloween celebration in the world! During the 31st October Mexico turns very bright in colours! For three days, Mexican honour the dead who come back home for Halloween. Families build altars, decorated with food, drinks and photographs (even wash basin and towel), to show their respect for the dead.
PS. You can get inspiration from the marvellous skeleton makeup! 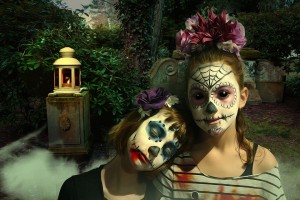 Let’s talk about serious stuff now. What will you wear this year? Do you want to be a werewolf, waiting for the full moon to disappear, or a Morticia Addams? If you usually wear black clothes, then you won’t have any problem in turning into a witch or a vampire. What about an horrific clown? The city will be full of Jokers this year! Zombies, mummies or devils, characters from movies and comics, folks legends and fairytales, there’s plenty of choice! Just use your fantasy and you will definitely have fun! But remember: the keyword is to be MONSTROUS - you can leave the Cinderella costume in your wardrobe, unless you’d scatter it with tomato sauce. 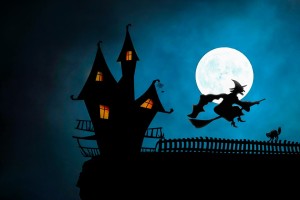 You don’t feel like going out trick-or-treating? Your Host Kids are ill? Is it too cold outside? No worries, you’d have plenty of things to enjoy your Halloween at home! The pop culture is filled with Halloween movies and cartoons: you can find the funnies witches in Hocus Pocus, the world of monsters is displayed in The Nightmare before Christmas, Coraline and Corpse Bride (Tim Burton rules!); you can also relax with It’s the Great Pumpkin, Charlie Brown, Beeetlejuice (mm tasty). In order not to forget the drama, we can suggest Edward Scissorhands as well, but to keep up with laughs Hotel Transilvania and the Haunted Mansion are the best. Moreover, every long-lasting TV series has an Halloween episode, from Friends to the mysterious Pumpkin in How I Met your Mother, the Simpsons and more!

Before starting the scariest TV-marathon ever, you can keep your Host Kids entertained with delicious Halloween recipes! Monster and bloody cookies, ghost popcorns, spider cakes… every ingredient can become disgusting. You can use red sauce to create blood, chocolate would remind you with… well you know that already! Challenge your fantasy and play with your Host Kids! It will be so much fun!

“It's all just a bunch of hocus pocus!”! What about you? Is there some hidden tradition in your home country that you would like to share? Feel free to leave us a comment and enjoy your Halloween night!

Boys and girls of every age
Wouldn't you like to see something strange?
Come with us and you will see
This, our town of Halloween
This is Halloween, this is Halloween
Pumpkins scream in the dead of night