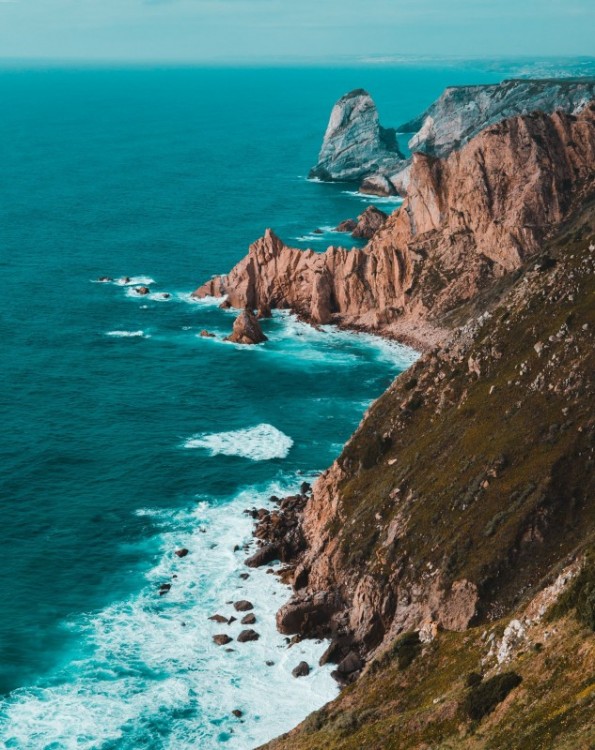 Sights, holiday resorts, guaranteed wanderlust: Portugal offers all this and much more. The country is located in the western part of the Iberian Peninsula. It borders Spain and the Atlantic Ocean, and although it is quite small, it is a country with many destinations and sights that will take your breath away!

Great perk: travelling to Portugal is easy and cheap. EU citizens don't need a visa and can enjoy their Portugal holiday without any paperwork.

There's no excuse: once you're in Portugal, a round trip is a must! 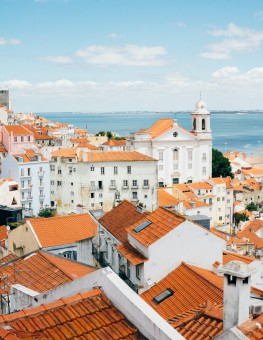 Lisboa
Let's start with Lisbon! It's the capital and the most famous city of Portugal, and it is also the biggest and the most international one.
It is the perfect combination between the old and authentic Portugal, and the new one: a vibrant and colorful destination that recently became one of the best cities where to live as an expat.

The capital is also the city that gave birth to Fado: the music genre (UNESCO heritage) that represents Portuguese history and culture in the world. Walking through the streets of Alfama, Lisbon's oldest neighborhood, you can still hear the original fado. In addition, it is not difficult to come across graffiti and paintings portraying her: Amália Rodrigues, the undisputed queen of fado!
Whether you're an Au Pair in Lisbon, or you're just spending a weekend there, another neighborhood where making a visit is a must is Belém. The Belém tower is probably the most captivating monument of the city. It was built between 1514 and 1520, and its purpose changed at various times. It is located really close to the Jerónimos Monastery: a religious and stunning building inside which lies the tomb of Vasco de Gama, a Portuguese explorer and the first European to reach India by sea.


A great way to visit the city, both to save time but also to not have to face the countless climbs by walking, is to take the famous Tram 28. Lisbon is known for its characteristic yellow trams. The number 28, however, is the most famous because it crosses almost the entire city, passing by Graça, Alfama, Baixa and Estrela: all places worth visiting.
Other places not to be missed are:
Another iconic symbol of this beautiful city is the 25th April bridge: the longest suspension bridge in Europe, that binds the capital to the Margem Sul (the south bank). On this side it is possible to visit the Sanctuary of Christ the King (Santuário de Cristo Rei).
Finally, how could we not mention Chiado and Bairro Alto: two iconic neighborhoods. The first one is an elegant and bohemian neighborhood frequently compared to Paris’ Montmartre district. The second one is the “neversleeping” neighborhood: full of restaurants and small places where you can dine while listening to the fado music, and very crowded from 11 PM until the earliest hours of the morning. 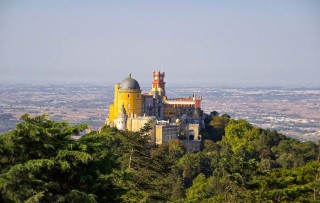 Not far away from the capital, the beautiful city of Sintra brings every tourist in an almost fairytale ambience.
The town of Sintra is known for its colorful Palácio Nacional da Pena, one of Europe’s finest palaces, and the Quinta da Regaleira, an extravagant 19th century Villa.
If heights and long walks don't scare you, you absolutely have to visit the Moors' Castle (Castelo dos Mouros), a strategic fortress that was built to have control over the entire area.
Once in Sintra, it is possible to take a bus to Cabo da Roca: a wild and rugged headland that marks the most western point in Europe. The view from this cliff is simply sensational, it is impossible not to be breathless in such a unique and unspoiled place. 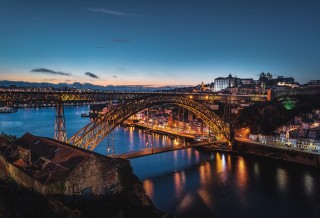 Porto
The second most known city in Portugal is Porto.
It is located in the northern part of the country and it is known for the famous wine which takes its name from the city itself.
On the south bank of the Douro - in Vila Nova de Gaia - it is possible to take part in cellars tours and taste the original Porto Wine right where it is produced.
Before starting the wine tasting, it is advisable to visit the city which, although small, has a lot to offer. Cais da Ribeira, Porto’s riverside area, is always chaotic, but represents perfectly the spirit of this colorful and picturesque city. Moreover, there are plenty of restaurants and bars around every corner and taking a walk on the riverside is a must. From this spot there is a perfect view of the iconic Luís I Bridge: an industrial symbol for Porto built in 1886.
The medieval Muralha Fernandina starts up from the Luís I Bridge and runs almost parallel to the funicular. The view of the Douro up here is unbeatable. The river is the undisputed protagonist of this city, so why not take a cruise? The Douro river trips are a unique way to visit this city and appreciate even more the beautiful atmosphere. During the trip it is even possible to see the Maria Pia Bridge, built in 1896 by Gustave Eiffel.
Finally, it is impossible not to mention the beautiful Livraria Lello: a delightful bookshop on Rua das Carmelitas. The building dates back to 1906, but the actual business is much older.
The highlight of the library is its sinuous wooden staircase, which has inspired the English writer J.K. Rowling who has lived in the city for a while. 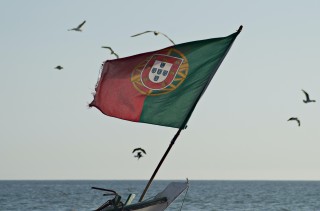 Braga, Coimbra and Évora
In Portugal there are many smaller towns that deserve the attention of tourists. One of them is Braga, a town located not far from Porto. It is one of Portugal’s oldest cities and was also an ancient seat of religious power, for this reason there are several of the ancient churches among which stands out the cathedral.
Another town that is really worth visiting is Coimbra. The city had an important role in Portugal history: it is the country’s former capital and hosts Portugal’s oldest University, and one of the oldest in Europe. The beautiful University is a World Heritage Site and it is located high on a hill in the middle of the city, precisely where Portugal’s first kings had taken up residence centuries before. I suggest visiting the city during the popular Queima das Fitas (“Burning of the Ribbons” in English): a university ceremony that takes place in May.  The importance of the University can be seen everywhere in the city.
Finally, another city worth mentioning is Évora: a timeless city in Alentejo steeped in Roman and medieval heritage. In Évora was built the second oldest university of the country. It is also possible to visit an ancient Roman Forum, and it is worth visiting its Cathedral, besides its historic centre. 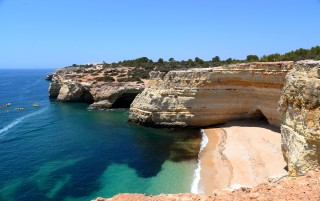 Algarve
For beach lovers, Portugal is paradise. Overlooking the ocean, you can find beautiful beaches just about anywhere, but it is in the south of the country that the sea is truly heavenly and unspoiled. The Algarve region is characterized by a soft climate tempered by the Atlantic and soft sandy beaches, and one of the best activities that offers is Dolphin Watching.
Ponta da Piedade is the headland south of Lagos and it is one of Europe’s favourite holiday destinations. Sagres is another wonderful area perfect for spending time relaxing and enjoying the sun and the sound of the sea. Cape St. Vincent - a cape in Sagres - is the southwesternmost point in Europe and setting for many naval battles that have occurred throughout history.
Finally, a spot that you shouldn't miss when visiting this region is Algar Seco, located in Carvoeiro. Here the ocean has eroded out the cliffs and formed little hollows. 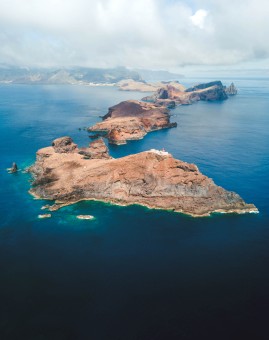 “Heroes of the sea, noble people, valiant and immortal nation”: these are the first words of the Portuguese national hymn. Portugal’s history and culture is deeply bonded to the sea. The Portuguese were among the first explorers to arrive in Africa, and in 1419 - during an exploratory mission - they discovered the archipelago of Madeira, which is located 520 km from the African coast and 1,000 km from the European continent.

The archipelago’s geography is astonishing: its natural landscapes are easy to discover on mountain roads or via historic irrigation channels known as “levadas”.
It is also possible to visit many botanical gardens with a crazy assortment of plants.
An amazing experience not to miss is the Funchal Cable Car: a modern cable car system located in the capital which follows the route of an old steam railway line. 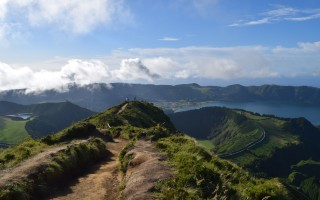 São Miguel Island
Last but not least, I suggest everybody who has the chance to visit the archipelago of the Azores. It is composed of nine volcanic islands and it is located in the middle of the North Atlantic Ocean, about 1,400 km west of Lisbon.
The main island, São Miguel Island, offers everything an adventurous tourist could wish: places to go hiking and where to walk peacefully, but also where to relax and forget your life before going on vacation.
The first place to visit in the largest Azorean Island is Lagoa das Sete Cidades: here two twin beautiful lakes are surrounded by the greenest vegetation you could imagine and shielded by a massive volcanic crater that rises like ramparts. Also on São Miguel Island is another stupendous crater lake and one of the largest bodies of water in the area: Lagoa do Fogo. Being a volcanic area, this Island is famous for its hot springs: in Poça da Dona Beija it is possible to enjoy a 40° bath: no matter how the weather is, once there you won’t be able to remember how it feels like to be soaked in colder water!

As you can see, Portugal offers sights and destinations that guarantee an unforgettable stay!