Alice from AuPair.com is sharing her story of being an Au Pair in Ireland for ten months

My name is Alice and I work as a Marketing Manager at AuPair.com. Eight years ago I was very lucky to be able to spend some months as an Au Pair in Ireland. In this blogpost I would like to inspire future Au Pairs to consider going to the beautiful green island that I have totally fallen in love with.
My parents were a bit skeptical when I decided to go abroad for a year after my voluntary social year in Germany for refugee aid. Many of my friends had long since started studying. However, I was not sure in which professional direction I wanted to go, and therefore I decided to jump into the deep end and let my dream of a stay in Ireland finally come true. It turned out to be one of the best decisions of my life and I am very grateful that my family ultimately supported me in the process.
Since I have always been fascinated by Irish music (I come from a very musical family) and I have been following the interesting history of Ireland since my school days, the decision was not difficult. I was also impressed by the various possibilities the country offers as well as the green landscapes and the almost untouched nature. Of course, the language also played a big role in the choice of the country and was eventually very beneficial for my later studies in English at university.
I found my dream Host Family quite quickly. It was the second family that was suggested to me. I had a few Skype conversations with the Host Mother, Nichola, and we immediately clicked. So the big adventure had started and from September 2014 I was already in the beautiful County Kildare in a small idyllic town, about one hour away from Dublin. For me, this was the perfect place, as I myself grew up in the countryside.
I settled in relatively quickly, although I had to get used to the Irish accent which was quite strong in the countryside. At the beginning I had to listen to my Host Father Robert very attentively to understand him. In addition, my immune system was a bit weak due to the change of location and the change of diet, and I was initially busy with several visits to the doctor.
Nevertheless, my Host Family, with son Jack and daughter Chloe, made me feel like I was part of the family from the beginning. As a result, homesickness was almost non-existent and I was able to fully engage in the new experience. I quickly got to know all the grandparents, aunts, uncles and cousins who lived in the same town or neighboring towns.
My daily routine was quite structured, but I always had enough time for myself or to prepare for the Cambridge Certificate in Advanced English. In the mornings I got up together with the family and took four-year-old Chloe to kindergarten. Around noon I prepared lunch and picked Chloe up again at 12 o'clock. Around 2 p.m. Jack came home from school. Most of the time I did arts and crafts with Chloe, we painted or went to the garden. The two children had an age difference of six years, so it was difficult to choose activities that pleased both of them, but Jack was fortunately already able to occupy himself well. Often he was with his buddies on the lawn next to our house playing soccer. Towards afternoon, I began to prepare dinner for the children, since they usually ate around 5 p.m. Nichola owned her own shop in town and usually came home shortly after dinner. Robert worked shifts and was always home at different times.
On Wednesdays, I usually went to the language school in the neighboring small town Newbridge for two hours and could enjoy my day off afterwards. The children then stayed with the grandmother. After the language school I went shopping (mostly in "Penneys", the Irish version of "Primark") or met with my Au Pair friends for a coffee/ a Guinness. 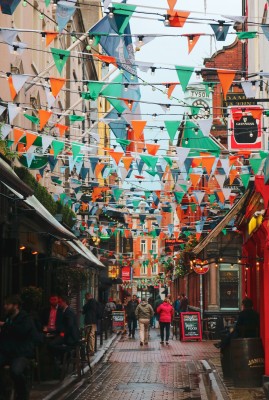 On the weekends I went on excursions nearby, e.g. hiking in the Wicklow Mountains (known from the movies "P.S. I Love You" and "Braveheart"), to the Punchestown Racecourse Festival (a famous horse race where we bet heavily) or to Dublin. Fortunately, I quickly made new friends in Dublin with whom I found a place to sleep for the weekends. Dublin is a colorful, modern and beautiful city. There are many museums to visit, for example the Irish National Museum, Kilmainham Gaol and the Guinness Brewery. In addition, it is of course the perfect place for a shopping trip and to get to know the Irish pub culture. Temple Bar is a district on the south bank of the River Liffey in the city center. There you can find a number of traditional Irish pubs with typical live music.
A few times I went on larger tours with friends, for example to Belfast and the Giant's Causeway, to Galway and the Cliff's of Moher (known from "Harry Potter"), to Connemara, to Killarney National Park and the Ring of Kerry. The green and breathtaking landscapes totally fascinated me! In addition, the Irish culture can be felt everywhere, actually every street sign had the Irish-Gaelic translation on it.
Even though people often complain about bad weather on the island I cannot confirm this prejudice in any case. Of course, it often rains because of the maritime climate and the proximity to the Atlantic Ocean, but the sun always comes out very quickly. The winter in Ireland is very mild and the temperature never reached less than 0 degrees.
During the ten months I was able to make German, Irish and other international friends. In the town itself there lived five other Au Pairs, four of them from Spain and one from Venezuela. Together we went to the playground with our Host Kids, to the local Irish pub to play pool and drink Guinness, or we had a movie night.
What I like about the Irish is their friendly and open nature. In every store you are greeted by the staff with a warm smile and the words: "Hi, how're you?". If you ask someone for directions, you immediately find yourself in a nice conversation. My Host Family was the epitome of an Irish family. They were interested, appreciative, treated me as an equal member of the family from the beginning, and would always consider my needs. I was invited to join family gatherings on weekends and even a vacation to Cork. My Host Mother in particular was a strong emotional support for me, with whom I could talk about almost any topic. From both parents I was encouraged and received approval, which gave me a lot of security and self-confidence. Furthermore, it was important for them to introduce me to Irish culture and to show me typical dishes, customs and sights.
My ten months in Ireland definitely made me braver, more self-confident and more open-minded and I am so grateful for all the experiences I was able to gain there! I am especially thankful for my Host Family who supported me on my way and with whom I still keep good contact today.

Au Pair in Poland: Useful tipsby Ewa on 11 Jul, 2022Read More »
Some Thoughts...
Nichola,
Aug, 16, 2022 - 04:08 pm
Thank you Alice for sharing your blogpost with us. It is a really open, honest piece and exactly how our experience was with you as our Au-pair. It is lovely that we have been able to keep in touch all this time too. You have a special place in our hearts ?
Alice, Aupair.com | Aug, 17, 2022 - 01:08 pm
Thank you Nichola, you have a special place in my heart as well! I look forward to seeing you next year :)
Leave a comment: